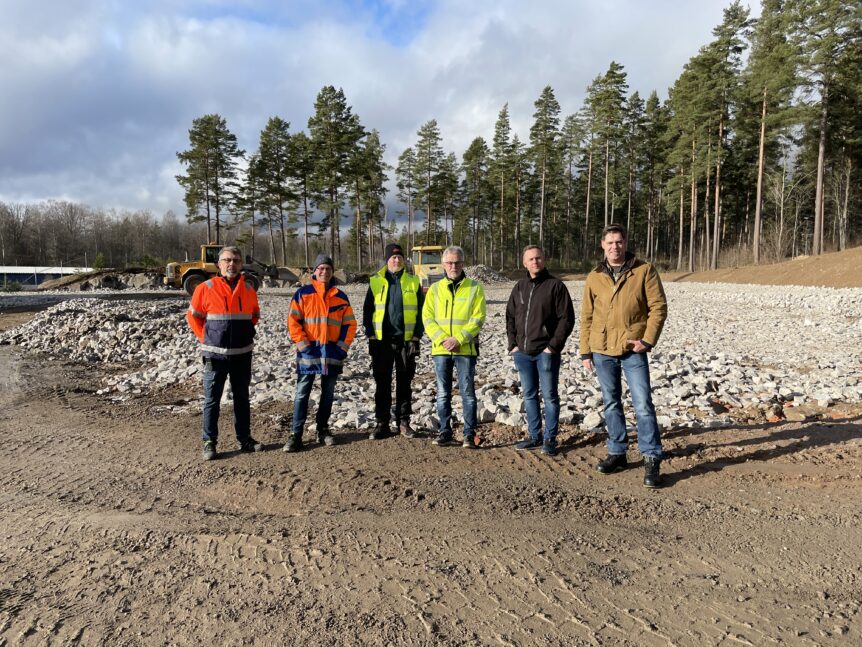 In 2021, Meva Energy announced the renewable energy agreement together with the tissue producer Sofidel. The agreement includes building a Meva Energy gasification unit next to Sofidel’s mill in Kisa, Sweden and supply the tissue mill with renewable gas and thereby replace consumption of fossil LPG for tissue drying.

The old office building that were situated at the area has been disassembled by Sofidel and the ground is ready for its transformation to the new purpose. The company Jens-Åke Bygg together with AB Gilbert Gustafssons will be responsible for the ground works.

The engineering of the upcoming Meva Energy unit is in full progress and the long lead items has been ordered, all according to the plan. The gasification plant will be commissioned in 2023 and can then start to replace the fossil LPG used in the tissue drying process, enabling fossil free tissue production.

Meva Energy has received part of the financing for the renewable energy plant in Kisa by the national support program Klimatklivet, administered by the Swedish Environmental Protection Agency.

Meva Energy is a deep-tech development company within thermochemical conversion of solid residue and biomass. Meva Energy’s proprietary and award-winning technology is able to convert solid residue to renewable gas and it is the world’s only conversion technology having full acceptance of fine fraction feedstocks such as saw dust or fiber residue. Due to the stability and simplicity of the conversion process, the Meva Energy system is able to produce renewable gas at the same cost levels as fossil gas. Meva Energy is supported by EIT InnoEnergy, the world’s largest sustainable energy innovation engine. Meva Energy is headquartered in Gothenburg, Sweden. Learn more at https://mevaenergy.com

The Sofidel Group is one of the leading manufacturers of paper for hygienic and domestic use worldwide. Established in 1966, the Group has subsidiaries in 12 countries – Italy, Spain, the UK, France, Belgium, Germany, Sweden, Poland, Hungary, Greece, Romania and the USA – with more than 6,000 employees, net sales of 2,173 million Euros (2020) and a production capacity of over one million tonnes per year (1,428,000 tonnes in 2020). “Regina”, its most well-known brand, is present on almost all the reference markets. Other brands include: Softis, Le Trèfle, Sopalin, Thirst Pockets, KittenSoft, Nalys, Cosynel, Lycke, Nicky, Papernet. A member of the UN Global Compact and the international WWF Climate Savers programme, the Sofidel Group considers sustainability a strategic factor with regards to growth and is committed to reducing its impact on natural capital and maximising social benefits, setting as objective the creation of shared added value for all stakeholders. Sofidel’s greenhouse gas (GHG) emissions reduction targets to 2030 have been approved by the Science Based Targets initiative (SBTi) as consistent with reductions required to keep warming to well-below 2°C, in line with the goals of the Paris Agreement.